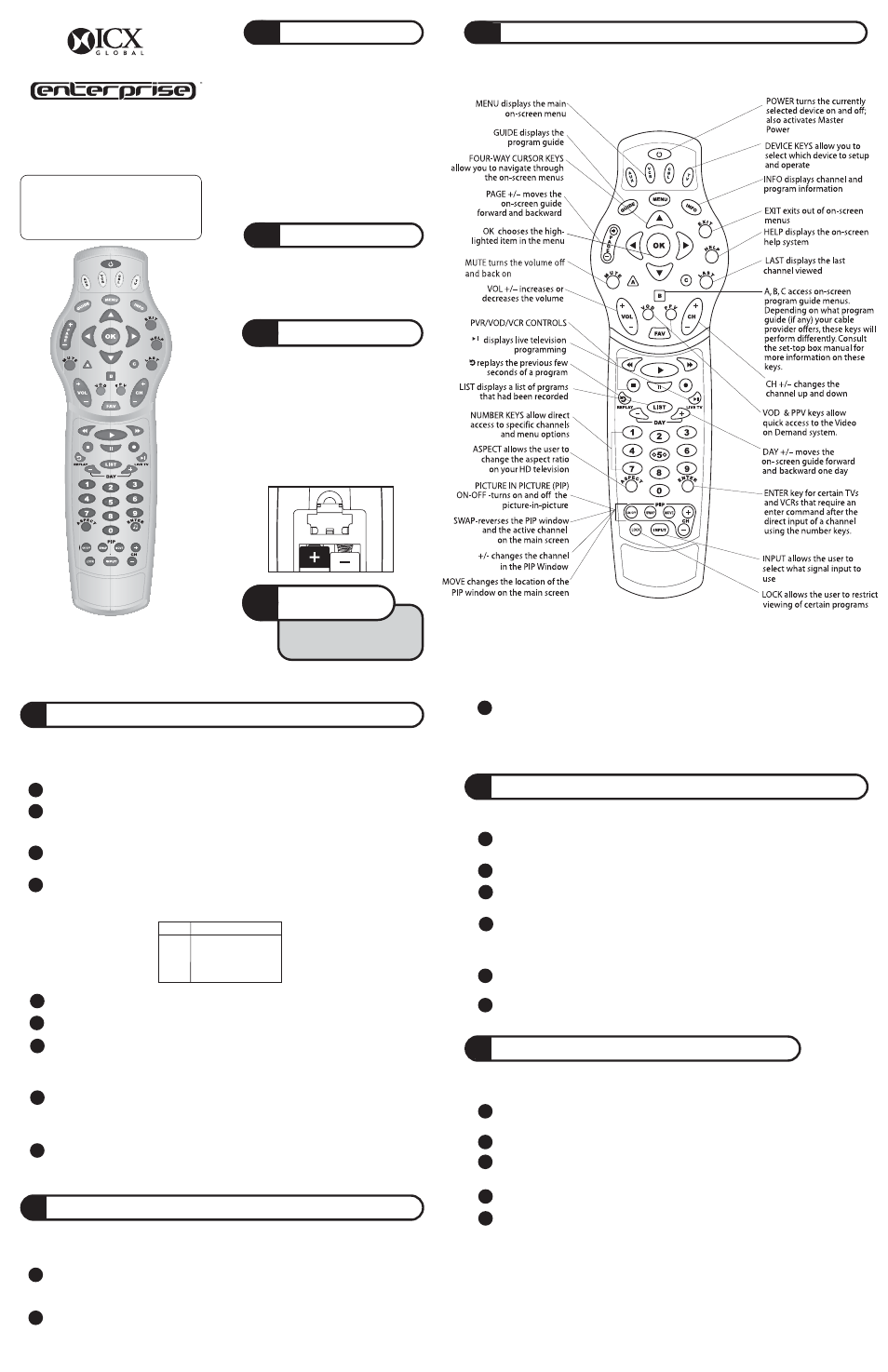 VISIT US ON THE WEB

You can find programming instructions

and codes for all of our remote

controls, as well as information about

User’s Guide for the

Use this guide in conjunction with your

Please plug your television power cord
into a separate wall outlet instead of the
power outlet on the cable box.

Tune your television to channel 2, 3 or 4
as directed by your cable provider.

Use only new AA Alkaline batteries
to insure consistent operation

Two AA batteries must be installed before
you can program or operate the remote
control.

located on the back of the remote control.

2. Place the batteries in the compartment
in positions matching the picture below.

The diagram below provides a brief description of each key on your universal remote control.
ICX Global provides these function descriptions as a general guide to allow you to become more
familiar with your remote. Functions may vary between different services. Please refer to your
set-top box manual for descriptions of specific functions.

Test the code by trying various functions. If the primary function keys fail to respond
satisfactorily try the next code listed for the manufacturer.

If you have tried all the codes listed for the manufacturer and the device does not
respond, try to program the device using SmartScan

as described in section 5.

Remember to record your device codes in section 11 when you are done.

By default, your Enterprise remote controls cable volume through the Cable Box, and the VCR
and DVD through the Television. To allow volume control through a different device:

To return volume control to the default state:

To manually set up the Enterprise to operate a device, find the manufacturer of the device in
the list of manufacturers’ codes. The codes are logically grouped by device type in section 12.
Then perform the following steps:

Press and release the VOLUME UP key, the CBL key will remain on.

Press and release the VOLUME DOWN key. The CBL key will turn off when VOLUME
DOWN is pressed, and will turn on when released.

Press and release the key corresponding to the device you wish to use to control
volume. (TV or AUD) After you release the key, the CBL key will flash three times and
turn off.

The Master Power function allows you to turn off and on two or more devices simultaneously
with a single press of the power button. The following steps describe how to program the
Master Power Control function:

selected device and find the best match. If you prefer manual programming or already have the
device codes you may also program the remote manually using the steps in section 6.

Turn on power for the device to be programmed.

procedure by pressing and holding the associated device key

(AUX, VCR, CBL, TV) until all device keys on the remote begin to flash (approximately 3
seconds). Release the power key.

If the device you’re are attempting to program matches the selected device key (e.g. TV
component with the TV device key) proceed to step 5.

If the device you’re are attempting to program does not match the selected key (e.g. a
second VCR programmed to the AUX device ), locate the correct prefix code for the
device you wish to program from the table listed below. Press and release the number
key that matches the prefix code.

Press and release the POWER key. The device key will stop flashing and remain on.

Point the remote control at the selected device.

Press and hold the UP ARROW key until the device turns off. While holding the UP
ARROW key the remote will send a new code approximately once every second. The
device button will blink each time a new code is sent. If you pass the code that turns off
the device, press the DOWN ARROW key to return to the previous code.

When the device turns off, you have found a candidate code. Press the POWER Key to
turm device back on. Test various functions using the remote control to determine if this
code will work. If primary functions do not work, make sure the device is still on then
resume SmartScan

by pressing the UP ARROW key to find another device code.

Once you have found a satisfactory code, press OK to lock the code. The power of the
device must be on. The device key will then flash three times. Go to section 10 to recall
and record your device codes. When all the codes have been attempted the device
button will flash rapidly.

Press and release the POWER key.

Individually press and release each device key corresponding to the components you
wish to be controlled by Master Power (starting with the cable device key). NOTE: If no
keys are pressed in this step, no change will occur in Master Power programming.

Press and hold the device key to be programmed until all device keys begin to flash
(approximately 3 seconds). Release the key. The selected device key will continue to
flash.

Converter. The following sections will help you program your remote to control your other
entertainment components.

The volume and channel controls are set
to control the cable converter. This can be
modified by following the instructions in
sections 7 and 9. This remote has a
master power feature for powering all
components together. See details in
section 8.

Press and release the POWER key. The CBL key will flash three times and turn off.

Manually turn on all devices. Then test the Master Power control by pressing the
POWER key.

To disable Master Power, repeat the previous steps selecting only one device for Master Power
(any device can be selected). The remote will now control the power ON/OFF of each device
separately.

NOTE: Once Master Power has been programmed for two or more devices, pressing the POWER
key in normal operation will cause the remote to transmit the POWER on/off commands for
those devices selected during Master Power programming,

To override this and transmit a POWER on/off command for a device not included in the Master
Power selection, press the DEVICE key for that device and immediately press the POWER key.