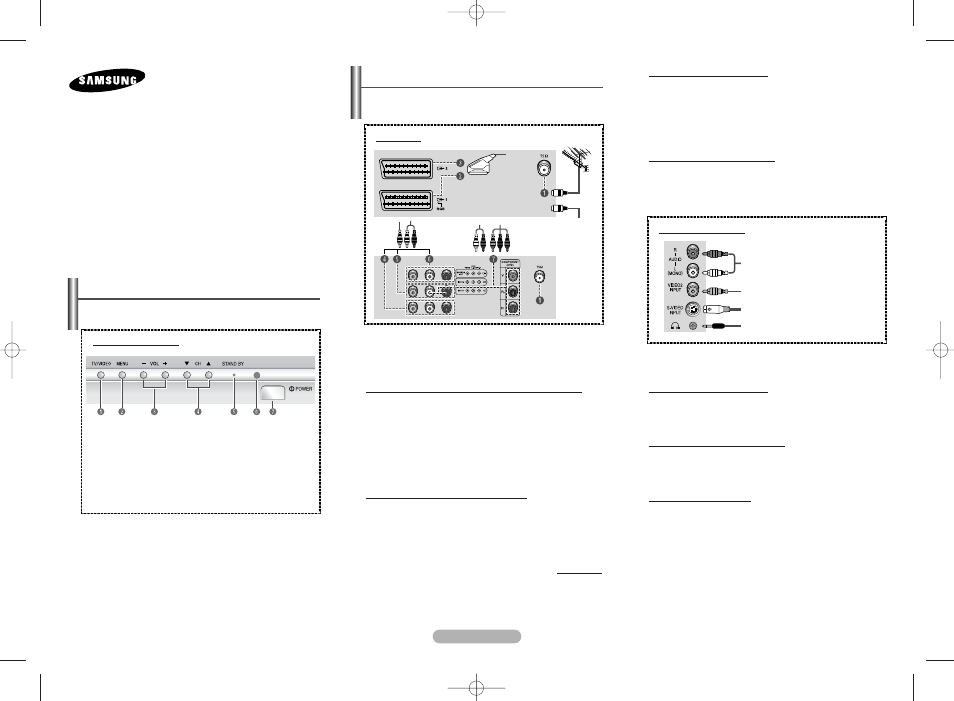 The actual configuration of your TV may be different,
depending on your model.

(depending on the model)

in standby mode depending on the model.

◆ The ˇ and ¨ buttons also have the same function as the

◆ If the remote control no longer works or you have

misplaced it, you can use the controls on the panel of the
television.

Front (or Side) Panel

The actual configuration of your TV may be different,
depending on your model.

(depending on the model)

Whenever you connect an audio or video system to your
television, ensure that all elements are switched off.
Please be sure to match the color coded input terminals
and cable jacks.

Connecting to an Aerial or Cable Television Network

Connect the aerial or network input cable to the Œ (75 Ω
coaxial socket).
To view television channels correctly, a signal must be
received by the set from one of the sources: an outdoor
aerial, cable television network, or satellite network.
If you are using an indoor aerial, you may need to adjust it
when tuning your television until you obtain a picture that is
both sharp and clear.

Connecting to the SCART Input/Output

Front (or Side) Panel

Please be sure to match the color coded input terminals
and cable jacks.

Connecting to the RCA Input

The Œ (AUDIO-L/R) and ´ (VIDEO) connectors are used
for equipment, such as a camcorder, video disc player, or
video game device.

Connecting to the S-VIDEO Input

The ˇ (S-VIDEO) and Œ (AUDIO-L/R) connectors are used
for equipment with an S-Video output, such as a camcorder
or VCR.

The ¨ (headphone) jack is used for watching a television
programme without disturbing the other people in the room.
Prolonged use of headphones at a high volume may damage
your hearing.

and retain it for future reference.

Register your product at

Connecting to the RCA Input

Connecting to the RCA Output

The RCAØ connectors are used for equipment, such as a
recording VCR or audio system.