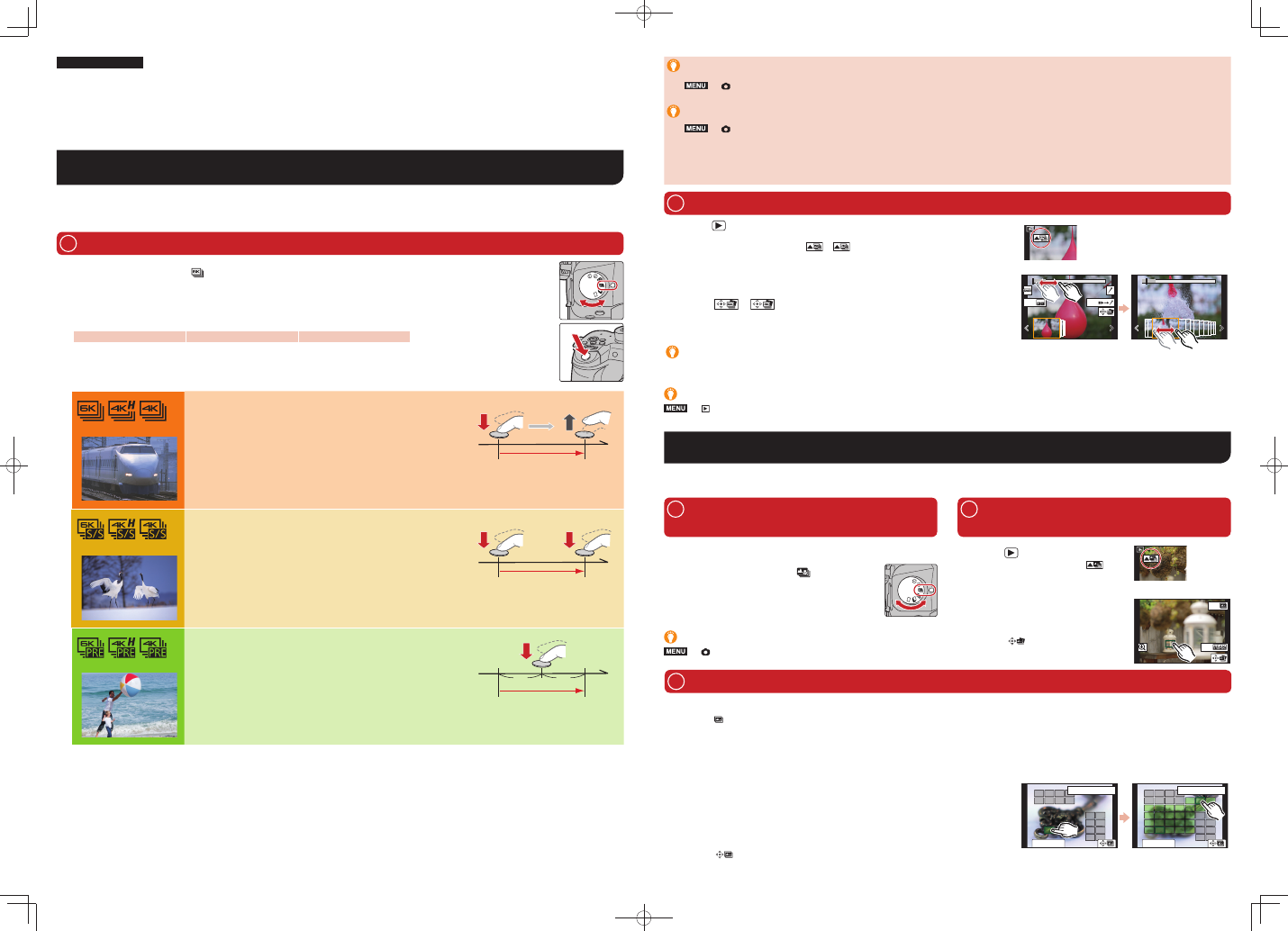 Set the drive mode dial to [

/ to select the picture size and burst speed, and press [MENU/SET].

After selecting the setting, press the shutter button halfway to display the recording screen.

For capturing the best shot of a fast-moving subject
(e.g., sports, aeroplanes, trains)

Burst recording is performed while the shutter button is pressed and held.
The shutter sound will be heard repeatedly.

0.5 seconds after it has been pressed fully.

Burst recording starts when the shutter button is pressed and stops when
pressed again. Start and stop tones will be heard.

You can add markers if you press [Fn2] during recording. You can skip to the

positions where you added markers on the playback screen.

For recording as needed whenever a photo opportunity arises
(e.g., the moment when a ball is thrown)

Burst recording is performed for approximately 1 second before and after
the moment that the shutter button is pressed. The shutter sound will be
heard only once.

In situations where you want to lock focus and exposure, such as when the

subject is not at the center, use [AF/AE LOCK].

Use a UHS Speed Class 3 card to record 6K/4K photos.

If you are using Auto Focus, [Continuous AF] will work during recording. Focus will be adjusted continuously.

You can reduce the blur of the subject by setting a faster shutter speed.

6K/4K burst ﬁ le will be recorded and played back in separate ﬁ les in the following cases. (You can continue recording without interruption.)

When [6K/4K Pre-Burst] or [Pre-Burst Recording] is set, the battery drains faster and the camera temperature rises. Use these functions only when recording with

“6K PHOTO” is a high-speed burst recording function which allows you to save
pictures extracted from images recorded with an aspect ratio for still pictures,
4:3 or 3:2, and with an effective picture size equivalent to a particular number of
pixels (approx. 18 megapixels) produced by images with a size of 6K (approx.
6,000 (horizontal)3,000 (vertical)).

2 Selecting the desired focus area and

The camera starts recording approximately 1 second before the shutter button is pressed fully, so you will not miss a photo opportunity.

The camera performs recording while deleting the data of the preceding part so that you can continue recording while waiting for a photo
opportunity, without replacing the card.

Once you start recording, the 6K/4K burst ﬁ le will be recorded and divided approximately every 2 minutes. Approximately the last 10 minutes (up to

approximately 12 minutes) will be saved. The preceding part will be deleted.
[Loop Recording(4K PHOTO)] is not available for [6K 18M].

If the image was recorded with [6K/4K Pre-Burst], proceed to step

Drag the slide bar to make a rough selection of scenes.

Drag the frames to select the frame you want to save as a picture.

] to save the picture.

A conﬁ rmation screen will be displayed.

On the save conﬁ rmation screen in step

Check the correction result, and touch [Save].

When saving pictures, reduce the noise produced during recording by high ISO sensitivity.

The camera can perform Burst recording in the same picture quality as 6K/4K photo recording while automatically shifting the focus to different areas.
After the recording, you can select the desired area on the screen and save a picture in which the selected area is in focus.

Set the drive mode dial to [

Decide on the composition, and press the

Select an image with the [

on the playback screen, and press
the cursor button .
Touch the desired focus area.

If a picture that is in focus is not available for

the selected area, a red frame will be displayed.
You cannot save a picture in this case.

] to save the picture.

of “Selecting the desired focus area and saving a picture”.

(When [Range Merging] is selected) Touch the desired focus area.

In-focus areas between the two areas will also be selected, and the combined in-focus area will be

indicated.
Gray areas indicate areas that may, if selected, cause the merged picture to look unnatural and areas

that cannot be selected.
Touch the focus area again to cancel the selection.

] to merge the pictures and save the resulting picture.