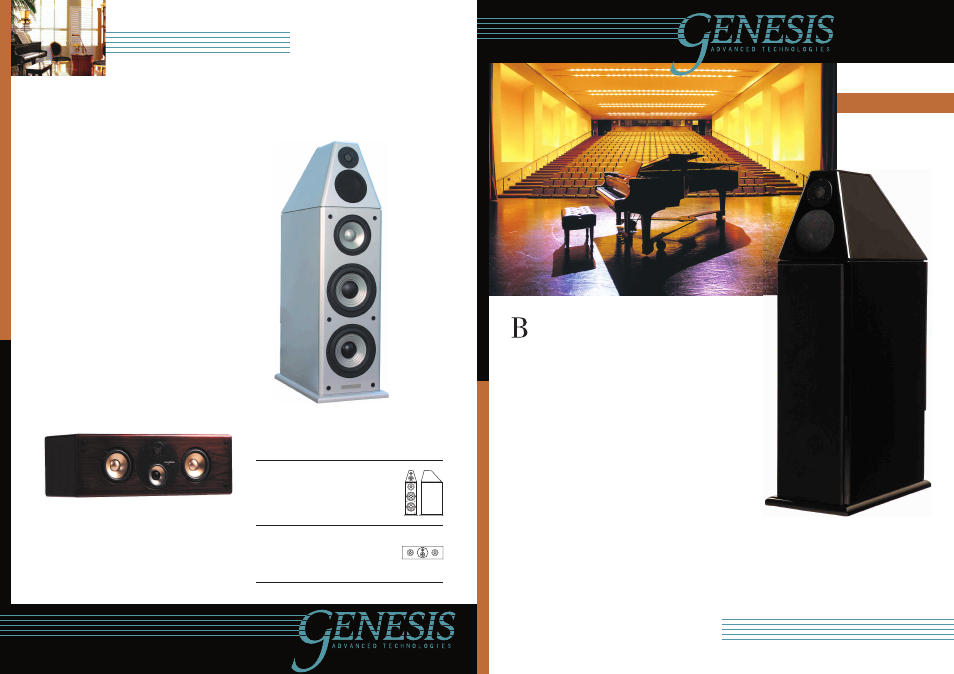 The story began in 1967 when Arnie Nudell

Fast forward to June of 1993 when he again

rocked the world and established new benchmarks
for quality, performance and aesthetics for high-
end audio with the introduction of the Genesis One
Loudspeaker System. It set new world reference
standards in sonic performance.

so stunning that you can often hear the performers
breathing; loudspeakers with such true three-
dimensional imaging that the listener is virtually
brought in the presence of the musicians; and
loudspeakers with a dynamic range so wide that it
will take your breath away.

Today, this ability to resolve the lowest level

detail with the same articulation and imaging that
exists at higher levels in inherent and deeply-rooted
in all Genesis products. Thus, you can enjoy the
same quality of detail and energy from the softest
whisper to the loudest roar, from ppp to fff.

the Genesis 5-Series performs superbly with

all music. It sets the standard for small speakers
in delivering profoundly powerful bass and a huge
life-like soundstage. Spectral coherence, three-
dimensional imaging, retrieval of low-level detail
and tremendous dynamic range capability means
that they will bring the musical performance into
your home – from a single vocalist to a large
symphony. They embody our concept of absolute
fidelity™.

The Genesis 5-Series has a family line of

impeccable pedigree. Starting with the Genesis V
in 1994, the 5-Series main loudspeaker is a full-
range loudspeaker in a modestly sized cabinet that
fits easily into any room. The second generation
G500 received numerous accolades and
recommendations from the audiophile press. It was
hailed as one of the most adjustable and tuneable
speakers on the market. The G501, our previous
best seller, continued this tradition and was also
renowned for setting standards in bass performance
and musical coherence.

Now, new members of the family and new features

allow the 5-Series to be used as part of a multi-
channel system – either for music or movies.
Beautifully finished, they fit stylishly into any home.

Natural wood veneers in either Santos Rosewood
or Bird’s Eye Maple mean that no two pairs of these
speakers will be the same. The Genesis 5-series
also fit into the décor of the contemporary and
modern home with high gloss painted finishes.

G5.2
Full-frequency audiophile music transducer in a
modestly-sized cabinet that can double as a home
theater performer.