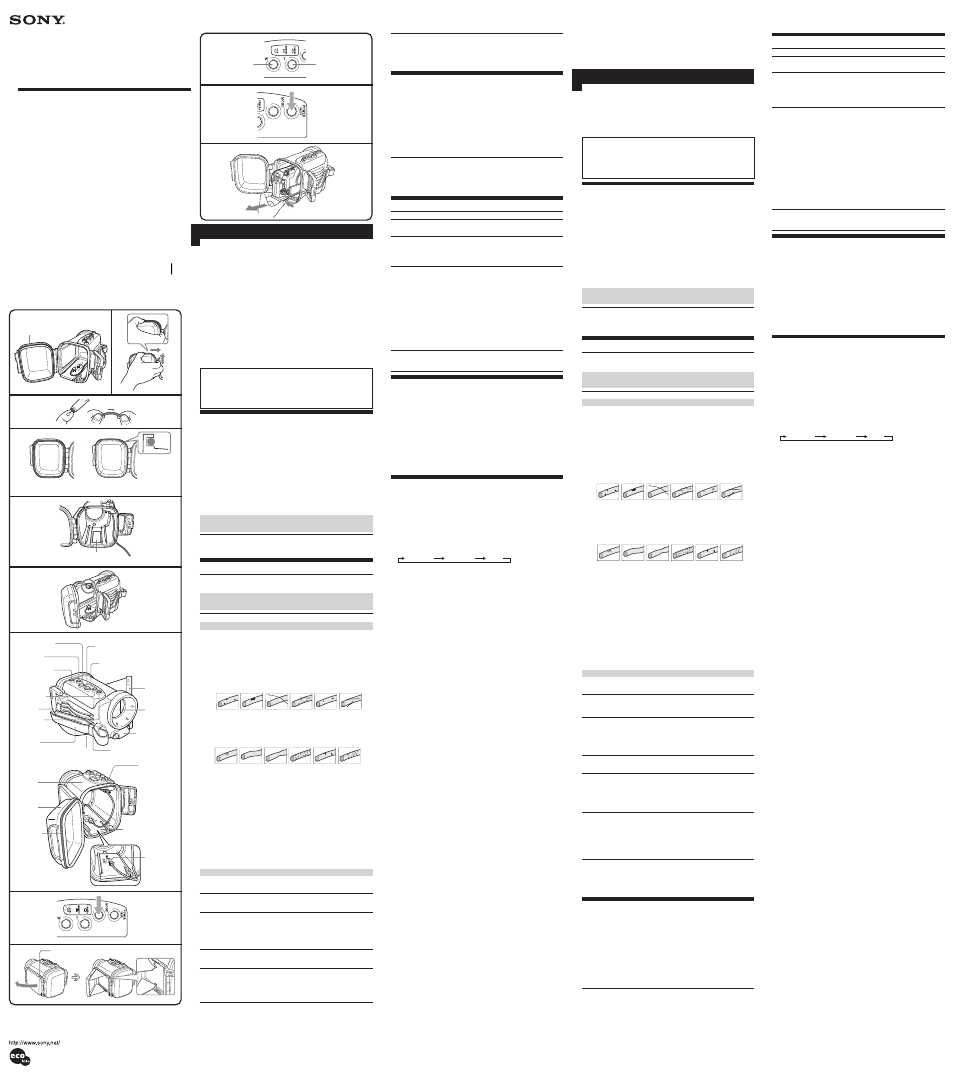 The model and serial numbers are located inside of the unit. Record the serial number
in the space provided below. Refer to them whenever you call upon your Sony dealer
regarding this product.

Model No. SPK-HCB Serial No.

NOTICE FOR THE CUSTOMERS IN THE U.S.A
CAUTION
You are cautioned that any changes or modifications not expressly approved in this manual

could void your authority to operate this equipment.
NOTE:
This equipment has been tested and found to comply with the limits for a Class B digital

device, pursuant to Part 15 of the FCC Rules. These limits are designed to provide reasonable

protection against harmful interference in a residential installation. This equipment

generates, uses, and can radiate radio frequency energy and, if not installed and used in

accordance with the instructions, may cause harmful interference to radio communications.

However, there is no guarantee that interference will not occur in a particular installation. If

this equipment does cause harmful interference to radio or television reception, which can be

determined by turning the equipment off and on, the user is encouraged to try to correct the

interference by one or more of the following measures:

– Reorient or relocate the receiving antenna.

– Increase the separation between the equipment and receiver.

– Consult the dealer or an experienced radio/TV technician for help.
• This Sports Pack SPK-HCB is exclusively for use with the Sony digital video camera

• The sports pack SPK-HCB is water- and moisture- resistant, making it possible to use

the Sony digital video camera recorder (referred to below as “video camera”).

• Usable at the depth as low as 5 meters (17 feet) under water.
• For using your video camera with this pack, refer to the operating instructions of

• Before you start recording, make sure that the video camera is working correctly

and there is no water leakage.

• Sony does not accept liability for damage to the video camera, battery, etc., when

using the sports pack or for the cost of recording if water leakage occurs as a
result of incorrect use.

• Do not subject the front glass to strong shock, as it may crack.
• Avoid opening the sports pack in the sea or at the beach. Preparation such as

installing and changing the cassette tape, “Memory Stick Duo” and disc should be
done in a place with low humidity and no salty air.

In these situations moisture condensation or water leakage may occur and damage
the equipment.

• Do not leave the sports pack under direct sunlight for a long period of time. If you

cannot avoid leaving the sports pack under direct sunlight, be sure to cover the pack
with a towel or other protection.

If water happens to leak in, stop exposing the sports pack to water immediately.
If the video camera gets wet, take it to the nearest Sony service facility immediately.
Repair costs must be borne by the customer.

What is the O-ring?

The O-ring ensures the waterproof qualities of the sports pack or other equipment.
(See illustration A)

Avoid fitting the O-ring in dusty or sandy locations.
1 Remove the O-ring. (See illustration B)

• To remove the O-ring, press it and slide it in the direction of the arrow as

illustrated. The O-ring has enough slack to be able to be removed easily.
Be careful not to scratch the O-ring with your fingernail.

• Do not use a pointed or metal object to remove the O-ring. This kind of object may

scratch or damage the sports pack groove or O-ring.

• Check carefully for the following. If found, wipe off with a soft cloth or tissue

• Lightly run your fingertip around the O-ring to check for any invisible dirt.
• Be careful not to leave any cloth or tissue paper fibers on the O-ring after wiping

inclusion, etc. Replace the O-ring if it is cracked or scratched.

Grains of sand or hardened salt sometimes get into the groove. Carefully remove
them by blowing with an air spray or by wiping them with a cotton wool bud. Be
careful not to leave any fibers from the cotton wool bud inside.

5 Apply a coating of grease to the O-ring.

• Do not use paper or cloth as fibers may stick to the O-ring.
• Make sure there is always a thin coating of grease on the surface of the O-ring.

• Fit the O-ring immediately after coating it with grease. Do not leave the greased

O-ring on a table or other surface.

6 Fit the O-ring into the groove of the sports pack.

Fit the O-ring evenly into the groove paying attention to the following points:
– Check for dirt on the O-ring.
– Check the O-ring is not twisted. (See illustration D)

How to check for water leakage

After replacing the O-ring, close the sports pack without inserting the equipment you
are going to use. Immerse the sports pack in water to a depth of about 15 cm for about
three minutes and check that no water leaks in.

If the sports pack is allowed to dry with sea water still in the O-ring groove, salt
crystals form which may impair the O-ring’s functions.

The serviceable life of the O-ring varies with frequency of use of the sports pack and
conditions. Generally, it is about one year.
Even if the O-ring is not cracked or scratched, deformation or wear reduces its
waterproof qualities. Replace the O-ring with a new one if you find cracks, skewing,
distortion, fine splitting, scratches, sand inclusion, etc.
After replacing, check that no water leaks in.

Use the grease supplied. Using other manufacturer’s grease will damage the O-ring,
and cause water leaks.

• After recording in a location with a sea breeze, wash the sports pack thoroughly in

• If sun oil is on the sports pack, be sure to wash it off thoroughly using lukewarm

Be sure to perform the above maintenance each time you use the sports pack. Do not
use any type of solvent such as alcohol, benzine or thinner for cleaning, as this might
damage the surface finish of the sports pack.

When storing the sports pack

• Attach the spacer supplied with your sports pack to prevent wear of the O-ring. (See

• Close the pack without fastening the buckles to prevent wear of the O-ring.
• Prevent dust from collecting on the O-ring.
• Avoid storing the sports pack in a cold, very hot or humid place, or together with

naphthalene or camphor, as these conditions might damage the unit.

The sound is not

Design and specifications subject to change without notice.

1 Turn on the sports pack.

Press the POWER button to turn on the power. The mode lamp lights up when the
sports pack is on. The mode is set to CAMERA mode.
Note
If the video camera is left in Standby mode for five minutes or more, it switches off
automatically. This is to preserve the battery.
You can change the “A.SHUT OFF” setting of this function to [Never] using the
video camera. For details, refer to the operating instructions of your video camera.
To return to Standby mode, turn the POWER button to “ON” again.

Press the mode change button to switch between modes in the following sequence.

Check the selected mode with the mode lamp on the sports pack.

To record still pictures, select MEMORY mode.
Some models support not only MEMORY mode but also CAMERA mode. Some
models support CAMERA mode only.
The functions are the same as those of your video camera, so refer to the operating
instructions supplied with your camera.

Notes
• When using a video camera not compatible with “Memory Stick Duo,” the video

camera operates in CAMERA mode even if the SPK-HCB is in MEMORY mode.

To close the retractable mirror

Release the projections on both wings, and close the lower wing first.

To turn off the power

Stop recording before turning the POWER button to “OFF.”

The green mark at the top of the LCD screen stops flashing and remains on. You can
now record a still picture.
* No image is recorded yet.

The image shown on the screen is recorded.

The word “Capture” appears at the top right of the LCD screen, and the image on
the screen stops.
*No image is recorded yet.

The image shown on the screen is recorded.

When using the HDR-HC3, DCR-DVD905/DVD505 models, you can use the Dual
Rec function. For details, refer to the operating instructions of the video camera.
Note
1 You cannot use Nightshot or other function for shooting in the dark with the sports

2 You cannot use a video camera’s flash or tele-macro functions with the sports pack.
3 Some models let you select the recording media (“Memory Stick Duo” or disc). For

details, refer to the operating instructions of the video camera.

1 Press the POWER button to turn off the video camera. (See illustration

2 Release the buckles, and open the rear body.

For details, refer to step 2 of “Installing the Video Camera” in the Sports Pack
Preparation Guide.
Note
Before opening the sports pack, wipe moisture off the sports pack and yourself. Do
not allow water on the video camera.

Holding the camera mounting shoe by the knobs on one side of it, press the knobs
and extract the video camera slowly.

the sports pack, and then disconnect the plugs from the video camera.

• The buckles are not

• There are scratches or

cracks on the O-ring.

• The battery pack is run out.

• The remote plug is not

• The “Memory Stick Duo” is

• The safety tab on the

cassette and the “Memory

Stick Duo” is set to

• The disc has run out of

• The disc has been finalized.

• The hard disk is full.

• Soon after being turned off,

the power does not turn on.

Connect the Audio/Remote plug to

the A/V jack or A/V OUT jack on

• Put the O-ring in the groove

• Replace the O-ring with a new one.

to the A/V jack or A/V OUT jack

on the video camera.

• Rewind the tape or use a new one.

Duo” or erase unneeded data from

• Slide the safety tab or install a new

cassette tape and a new “Memory

• Use a new disc or format the disc

• Unfinalize the disc (except DVD-

• Erase unneeded data from the hard

• Leave the sports pack for 1 second

or more after the mode lamp on the

• Turn the sports pack on again.