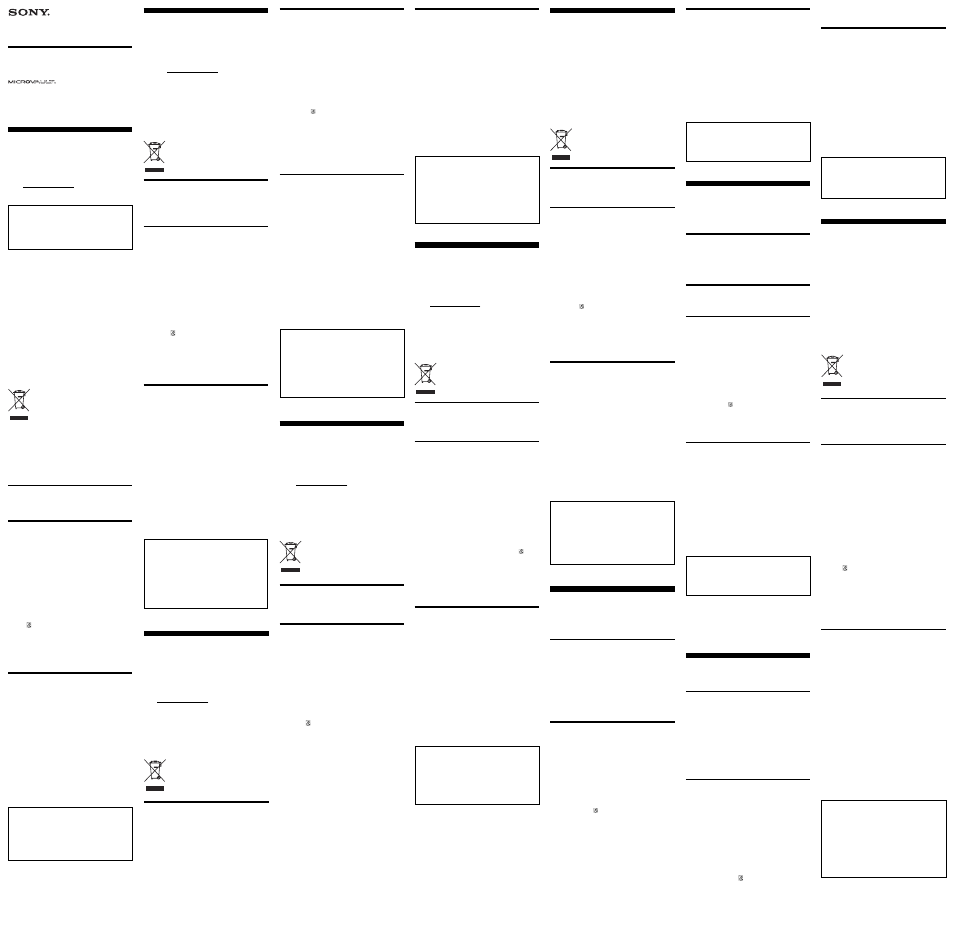 WARNING
Keep away from children. If swallowed, promptly see a doctor.
To reduce the risk of fire or electric shock, do not expose this

apparatus to rain or moisture.
To avoid electrical shock, do not open the cabinet. Refer servicing

to qualified personnel only.
Owner’s Record
The model number and serial number are located on the side of the product. Record the

Serial No.
For Customers in the U.S.A.

If you have any questions about this product, you may call: Sony Customer Information Center

This device complies with part 15 of the FCC rules. Operation is subject to the
following two conditions: (1) This device may not cause harmful interference, and (2)
this device must accept any interference received, including interference that may
cause undesired operation.

could void your authority to operate this equipment.
Note:

device, pursuant to part 15 of the FCC Rules. These limits are designed to provide

reasonable protection against harmful interference in a residential installation. This

equipment generates, uses and can radiate radio frequency energy and, if not installed and

used in accordance with the instructions, may cause harmful interference to radio

communications. However, there is no guarantee that interference will not occur in a

particular installation. If this equipment does cause harmful interference to radio or

television reception, which can be determined by turning the equipment off and on, the user

is encouraged to try to correct the interference by one or more of the following measures:

– Reorient or relocate the receiving antenna.

– Increase the separation between the equipment and receiver.

– Consult the dealer or an experienced radio/TV technician for help.

limits for digital device pursuant to subpart B of Part 15 of FCC Rules.
For Customers in CANADA

This Class B digital apparatus complies with Canadian ICES-003.
For Customers in Europe

This product conforms to the following European Directives,

This product complies with EN55022 Class B and EN55024 for use in the following areas;

The manufacturer of this product is Sony Corporation, 1-7-1 Konan Minato-ku Tokyo,

The Authorized Representative for EMC and product Safety is Sony Deutschland GmbH,

or guarantee documents.
Disposal of Old Electrical & Electronic Equipment (Applicable in the

European Union and other European countries with separate

product shall not be treated as household waste. Instead it shall be

handed over to the applicable collection point for the recycling of

electrical and electronic equipment. By ensuring this product is

disposed of correctly, you will help prevent potential negative

consequences for the environment and human health, which could

otherwise be caused by inappropriate waste handling of this product.

The recycling of materials will help to conserve natural resources. For

more detailed information about recycling of this product, please

the guidelines and conditions presented in the instruction manual, Sony will replace this

product with an equivalent product free of charge within 1 year after purchase date. This

warranty is subject to the conditions indicated herein. Sony shall not be liable for loss or

damage to data stored in the product howsoever caused.

NOTE: “FOR YOUR PROTECTION”

When Using USB Flash Drive for the First Time (Installing

Ordinarily, the device driver is installed automatically when you connect the Micro Vault.

However, with some USB 2.0 cards or boards, you may need to initiate installation manually.

Follow the instructions displayed on the screen to search for a suitable driver.
Note:

manual. Otherwise, data may not be recorded correctly.

• If the USB port connector is not easily accessible, you can use a USB hub to attach the

Micro Vault to the USB port connector on your computer.

and connect it to a USB port on the computer.
When running Windows 7, Windows Vista, Windows XP, or

device appears. (The drive name varies, depending on your computer system.)

drive icon, just as you would when copying data to a hard disk or to a floppy disk.
When running Mac OS 9.0 and higher

drive icon, just as you would when copying data to a hard disk or to a floppy disk.

the screen. In the window that appears, select the name of the device that is to be removed,

then click the Stop button. When the Stop a Hardware Device screen appears, make sure

that the correct information is displayed, and then click the OK button. When the “Safe to

Remove Hardware” message appears, you may remove the Micro Vault. (The icon and

messages that appear may vary depending on the version of the OS.)

When running Windows Vista, you can also select “Safely Remove Hardware” by right-

clicking the Micro Vault drive icon in Explorer or My Computer.
When running Mac OS 9.0 and higher

• When formatting the device, use the format software which you can download from the

website. To avoid any changes of the specifications, do not format the device in any other way.

computer is started up, restarted, or restored from sleep mode. Always disconnect the

Micro Vault from the computer before performing any of these operations.

• The Micro Vault has a hole for attaching a strap or a ring. However, a hook-shaped

metal object (such as a key holder) should not be attached to this hole, because it may

cause damage to the Micro Vault.

• Do not place the unit in locations that are:

Clean the unit with a soft, dry cloth or a soft cloth lightly moistened with a mild

Do not use any type of solvent, such as alcohol or benzene, which may damage the finish.

It is strongly recommended that you periodically back up the data written on the unit.

Sony Corporation assumes no liability for any damage or loss of data that may occur.
Precautions for Transfer and Disposal
If data stored on the Micro Vault is deleted or reformatted using the standard methods, the

data only appears to be removed on a superficial level, and it may be possible for someone

to retrieve and reuse the data by means of special software.

To avoid information leaks and other problems of this sort, it is recommended that you use

commercially available software designed to completely remove all data from the Micro Vault.

• Micro Vault is a trademark of Sony Corporation.

• Microsoft and Windows are registered trademarks of Microsoft Corporation in

the United States and other countries.

• Mac and Macintosh are trademarks of Apple Inc., registered in the U.S. and

and ® symbols are not used in this manual.

• Our product warranty is limited only to the USB Flash Drive itself, when used

normally in accordance with these operating instructions and with the

system environment. Services provided by the Company, such as user

support, are also subject to these restrictions.

of this unit, or for any claim from a third party.

• The Company cannot accept any liability for: problems with your computer or

for specific hardware, software, or peripherals; operating conflicts with other

installed software; data loss; or other accidental or unavoidable damages.

from third parties, etc., arising from the use of the software provided with this unit.

• The software specifications may be subject to change without notice.

as mensagens que aparecem podem variar com a versão do SO.)