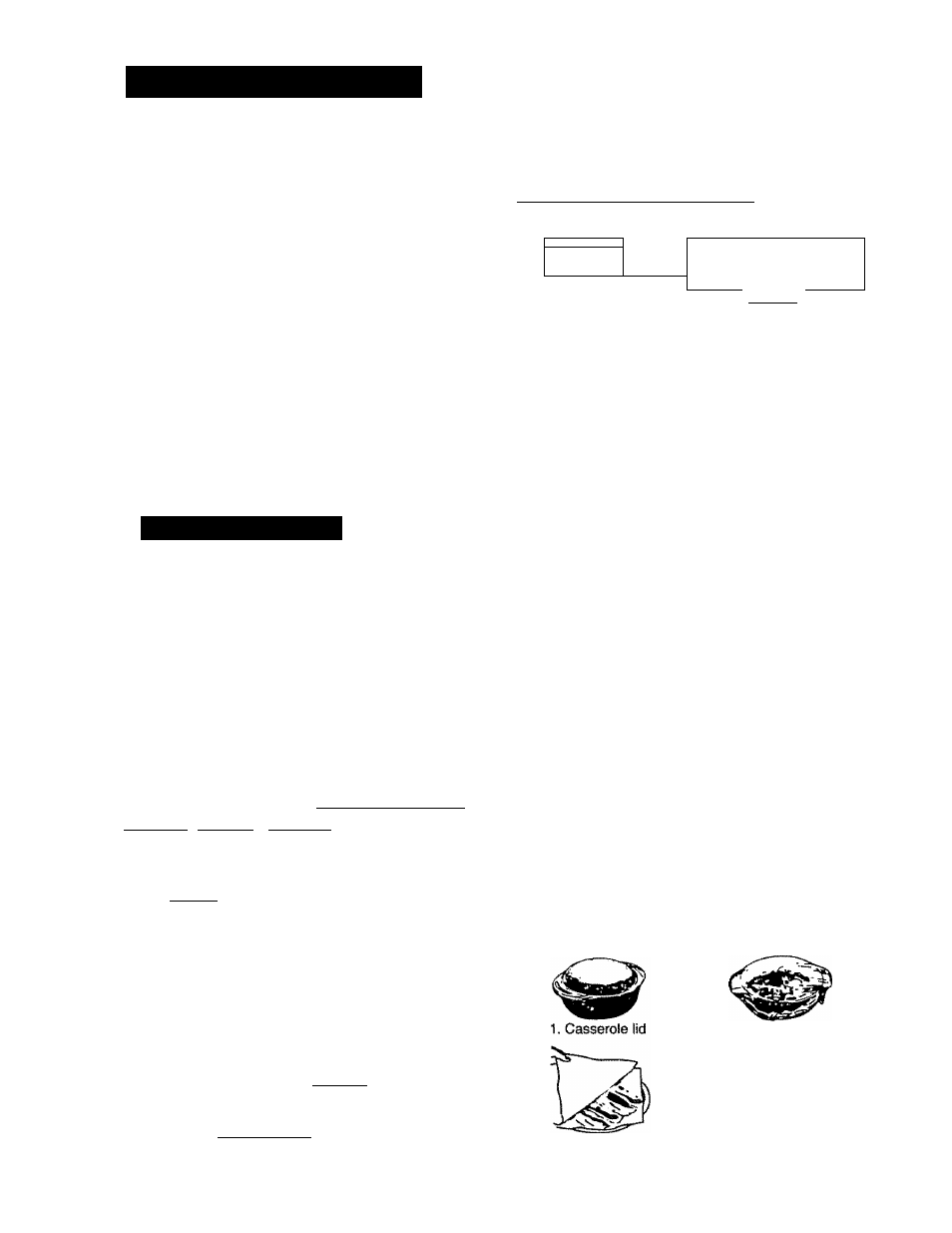 “Amount“ column on the DEFROST CHART, you need to
defrost manually.

You can defrost any frozen food, either raw or previously
cooked, by using Power Level 3. Follow the exact 3 -step

procedure found under Time Cooking on page 10. Estimate
defrosting time and press 3 for 30% when you select the
power level.

For either raw or previously cooked frozen food the rule of
thumb is approximately 5 minutes per pound. For example,
defrost 5 minutes for 2-3 cups of casserole or 1 pound of
frozen spaghetti sauce.

Always stop the oven periodically to remove or separate the
portions that are defrosted, if food is not defrosted at the end
of the estimated defrosting time, program the oven in 1
minute increments on Power Level 3 until totally defrosted.

When using plastic containers from the freezer defrost only

Sharp’s Sensor is a semi-conductor device that detects the
vapor (moisture and humidity) emitted from food as it heats.

The sensor adjusts the cooking times and power level for

various foods and quantities. It takes the guess work out of
microwave cooking.

1. Room temperature should not exceed 95°F.

Exhaust vents are provided on the back of the unit for

propercooling and airflow in the cavity, To permit adequate
ventilation, be sure to install the unit so as not to block
these vents. There should be some space foraircirculation,

Be sure the exterior of the cooking container and the

interior of the oven are dry. Wipe off any moisture with a
dry cloth or paper towel.

number will appear in the display. Do not open the oven
doorortouch STOP/CLEAR during this part of the cooking
cycle. The measurement of vapor will be interrupted, If this
occurs, iE,g,9g,9| will appear and sensor cooking will be
interrupted. To continue cooking, touch the STOP/CLEAR
pad and select cooking time and variable power. Door
may be opened when remaining cooking time appears on
display. At this time, you may stir or season food, as
desired,

If additional time is needed, continue to cook with variable
power and time.

If the sensor does not detect vapor properly with popcorn

and bacon, the oven will turn off, and the correct time of
day will appear in the display. I'

i will flash at the

end of properly popped com, pizza and bacon. With the
other sensor settings, if the sensor has not detected the
vapor of the food,

wHI appear, and the oven will

Touch to restore beverage to a more suitable drinking
temperature.

Beverage can only be entered within 1 minute after cooking,

opening and closing the door or touching the STOP/CLEAR
pad,

To increase quantity of beverage, touch 1-4 times for
multiples of 1/2 mug. For example, touch BEVERAGE
3 times for 11/2 full mugs or 3 half full mugs.

temperature, For example, bacon would be at refrigerator
temperature and canned soup at room temperature

2. Foods weighing less than 3 ounces should be cooked by

Some foods work best when covered. Use the cover
recommended in the chart or recipe for these foods.
1. Casserole lid
2. Plastic wrap: Use plastic wrap recommended formicrowave

3. Paper towel: Use paper towels to absorb excess fat when

under dish to secure. If dish is wider than paper, overlap
two pieces at least one inch to cover.

Be careful when removing any covering to allow steam to

escape away from you.