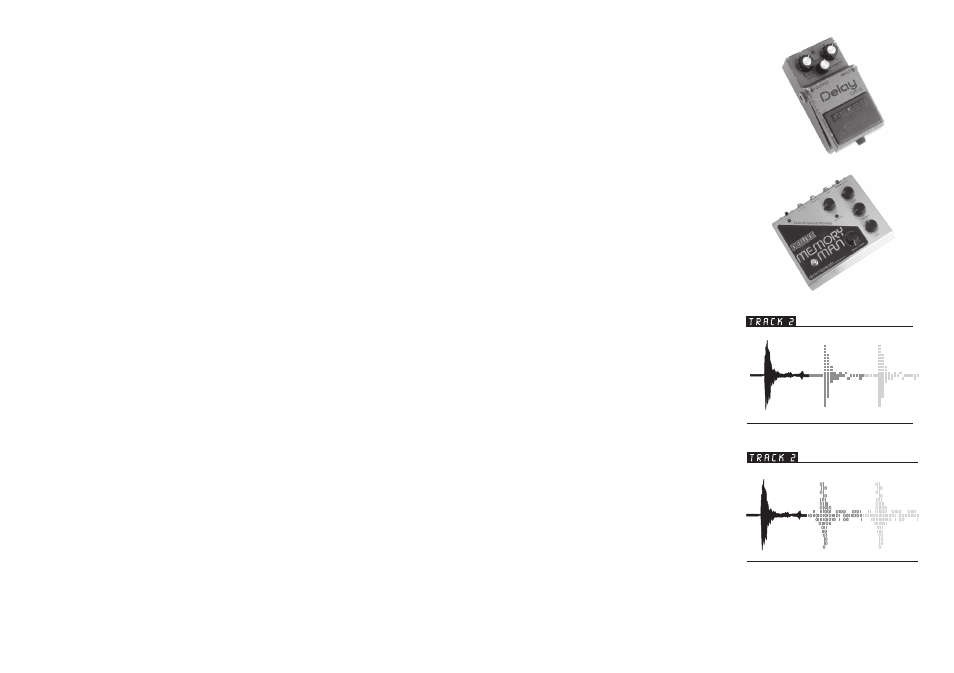 This model is a digital delay with bass and treble tone controls. The 24 bit processing and true stereo audio path of the Line

The first digital delay units were introduced in the early 80’s. These pedals and rack boxes took advantage of emerging digital

technology to provide guitarists with longer delay times. Unlike the high resolution 24 Bit processing of your Line 6 Delay Mod-

eler, these early digital units generally had only 8 bit resolution. Low bit resolution can create a unique sort of grunge and noise

that is sometimes just the sound you’re looking for. Early model digital samplers are sometimes used in modern-day industrial and

This pedal uses the “bucket brigade” electronics of other analog echoes, and adds a chorus circuit. This adjustable chorus is ap-

plied to the echoes only, leaving the direct sound unaffected. This popular pedal, with its warm, distorted tone and swimming

echoes, became an important tool for many guitarists, and was an essential part of the guitar sounds for the first U2 album. Part

of the Deluxe in Deluxe Memoryman was the increased delay time of 500 milliseconds. Your Delay Modeler’s Analog Echo

based on* the Boss

Analog echo units like the DM-2 were designed as improvements over the tape echoes that came before them, using “bucket

brigade” electronics to give guitarists echo units that were more reliable than the tape-based delays. Analog delays are treasured

for the warm, distorted tones they produce, and are also great for creating more experimental sounds. Try this, for instance: set

the DELAY TIME at 12 o’clock and REPEATS knob to max and play in some guitar, so the delay circuit “overloads.” Now spin

the DELAY TIME knob quickly to get something like the sound of a space-aged speeding race car imploding on itself. TWEAK