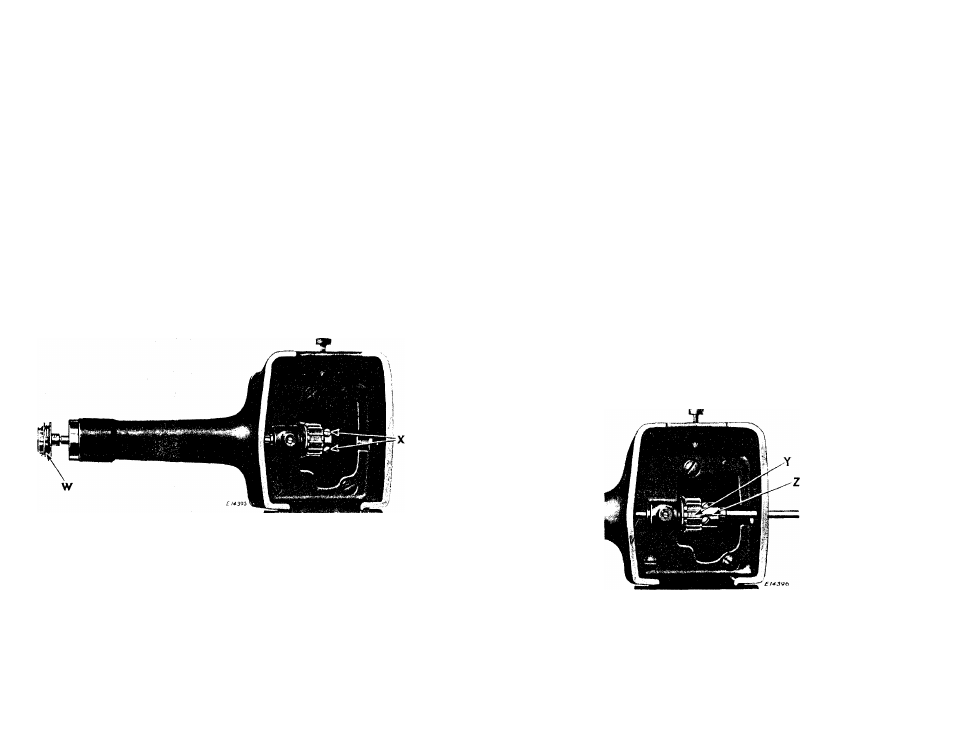 To Time the Hook

Loosen the screws (X,Fig.18) In the hook shaft connection

belt pulley and turn the balance wheel toward you until the

mark (Q,Fig.17) across the needle bar Is Just visible at the end

of the bushing, then stop turning and hold the wheel firmly; with

the left hand, turn the hook until the point (R,Fig.17) is at the

end play to the shaft Is almost eliminated, then retlghten the

To Remove the Hook

the cylinder end cover (F), and draw out the hook and shaft (W,

To Set the Hook To or From the Needle

right to set the hook closer to the needle, or to the left to set

It farther from the needle. After carefully adjusting and timing

the hook to the needle, tighten the screws (V,Fig.17 and X,Flg.

18)'. Leave the least amount of end play possible to the shaft,

To Remove the Bobbin Case

To remove the bobbin case from the sewing hook to thoroughly

clean the bobbin case, remove the screw (U,Fig. 17) and open the

gib (T); turn the balance wheel until the point of the hook is

toward you and remove the bobbin case. See that there Is no lint

or dirt under the tension spring.

When replacing the bobbin case In the sewing hook, have the

position the same as when removing it. Be sure to have the notch

at the top of the bobbin case (at G,Flg.6) entered by the stop on

the cylinder end cover, then close the gib (T,Fig.17) and secure­

ly tighten the screw (U), being careful not to damage the head of

To Remove the Belt from Within the Arm

Slide the arm shaft connection belt (Y,Fig.19) off the lower

pulley, remove the balance wheel from the end of the arm shaft,

loosen the arm shaft bushing (back) screw (B,Flg.2) and remove

the bushing, lift the belt up through the arm cap hole as far as

possible and draw It out through the space formerly occupied by

When replacing the belt see that the sewing hook and needle

are In correct time before running the belt on the lower pulley,

and verify the correctness of the timing before commencing to

To facilitate the replacing of the belt on the lower pulley,

loop of the belt and slide It over the hub of the pulley, as