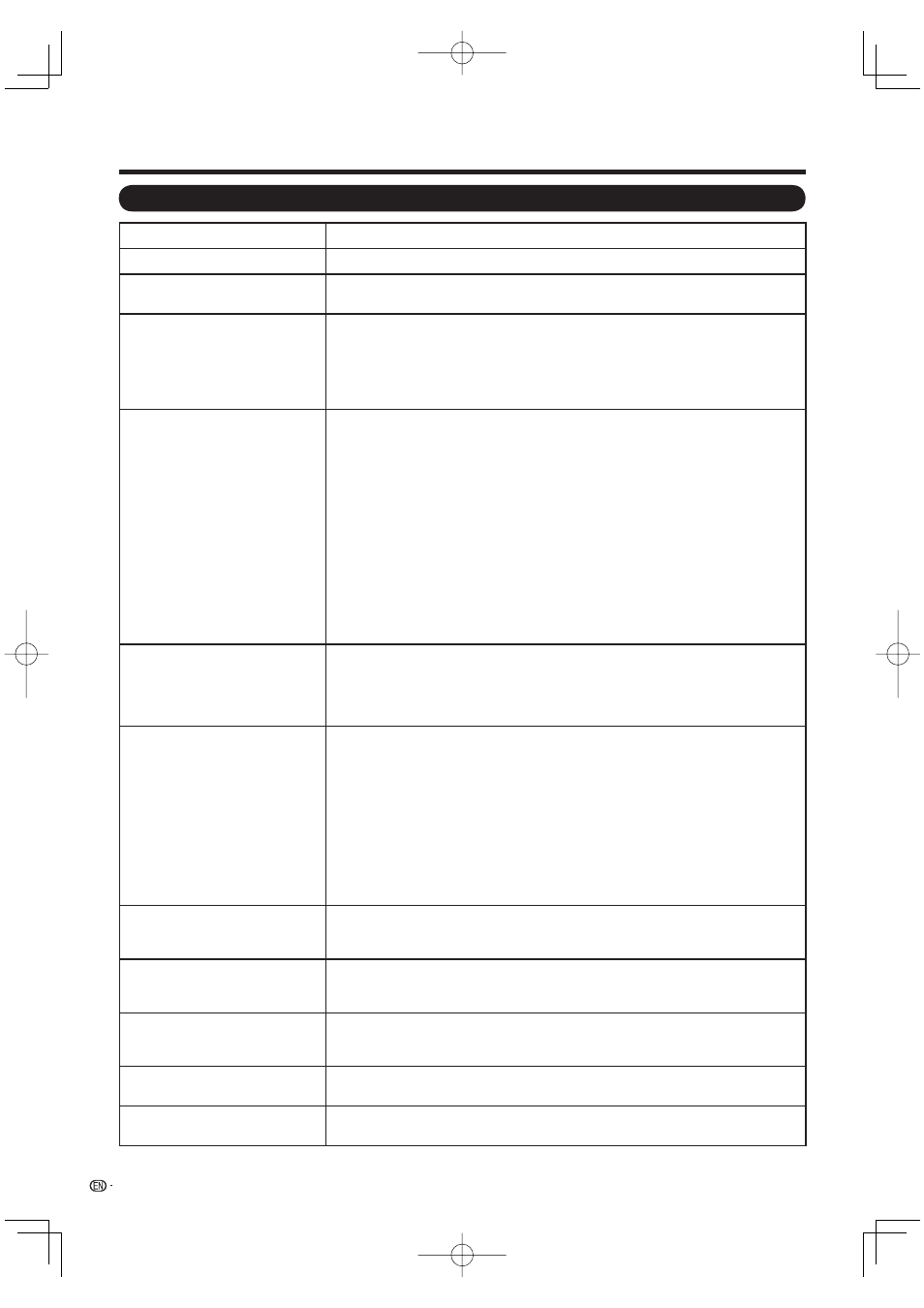 • Take out the disc and clean it.

• Has the TV been subjected to shock or impact? Are you using it in an unstable

location? The TV will stop if it senses shock or vibration.

• No sound or distorted sound

• There is no sound during still mode, slow motion playback, fast forward and fast

• Take out the disc and clean it.
• Audio may not be output depending on the audio recording status, such as when

audio other than an audio signal or non-standard audio is recorded for the audio
content of the disc.

• Make sure that region code on the disc matches that of this TV.
• The TV can only play BD-VIDEO discs with Region Code “A” or no Region Code.
• BD-RE Version 1.0 discs cannot be played.
• To enable playback of a recorded DVD, fi nalize the disc in the recorder that was

used to create it.

• Take out the disc and clean it.
• Make sure that the disc is loaded properly. The disc should be loaded with the

playback side facing the back of the TV.

• If there is condensation in the TV, take suitable countermeasures.
• Proper playback may be impossible due to the state of the disc recording, a

scratched, warped or dirty disc, the state of the pick-up, or compatibility issues
between this TV and the disc being used.

not play in this TV.

• When the recorded time of a disc is unusually short, playback may not be possible.
• The TV cannot play back video which was not recorded normally.

• During playback of a commercial

BD-VIDEO or DVD-VIDEO
disc, the soundtrack switches
between dubbed and original
language.

• Some commercially available BD-VIDEO and DVD-VIDEO discs contain the

soundtrack as used during TV broadcast of the material. During parts where there is
no dubbed sound, the TV will switch to the original soundtrack, which may result in
a change in language.

For BD-VIDEO, stop playback and disable Parental Control for the respective age

For DVD-VIDEO, enter the 4-digit password number and select a suitable Parental

Control level from the menu.

• Check the region code indicated on the disc package. BD-VIDEO and DVD-VIDEO

discs have a Region Code which specifi es in which geographical region the disc can
be played. In North America, the following discs can be played.

playing DVD discs recorded or
edited in another recorder.

• Resuming playback from a

previous point does not work.

disc and the playback circumstances.

• Cannot switch the soundtrack of

• If the TV is connected to audio equipment via a digital link, switch the soundtrack

at the amplifi er. If the amplifi er has no suitable function for this, use an analog
connection and switch the soundtrack at this TV.

• Take out the disc, and then load the disc again.
• Turn power off the main power, and then turn power on again.