Lenses: how they capture and control light, Read your lenses a look inside, Projecting an image – Sony a Lenses User Manual 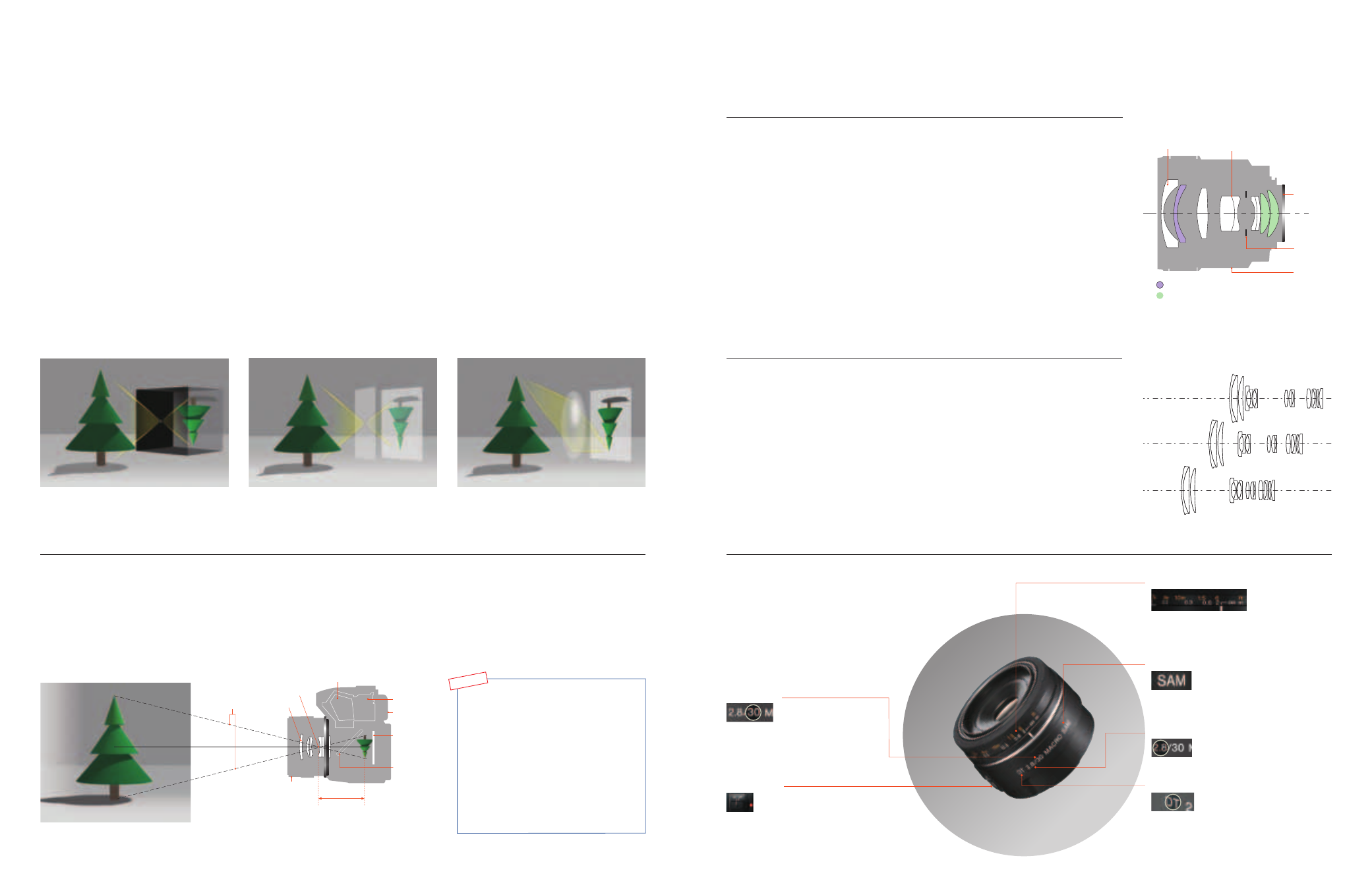 The job of varying focal length in a zoom lens
requires a fairly complex mechanism that
translates zoom ring rotation into precise group
movement along the optical axis of the lens. Zoom
mechanisms must be precisely manufactured
to exacting tolerances so that all elements and
groups stay in perfect alignment throughout the
zoom range.

Focusing is sometimes accomplished by moving
the entire lens closer to or further away from
the image sensor plane, although some lenses
employ a “floating construction” in which groups
of elements move independently in order to
maintain optimum optical performance at all
shooting distances.

There is a lot of pertinent information
printed or engraved on the outside of
lenses that can help you understand their
characteristics and how to best use them.

Here are a few examples.

Lenses: How they capture and control light

The linguistic roots of the word “photography” are the Greek words meaning “light” and “drawing.” Photography is “drawing
with light,” and lenses are the brushes. After their imagination, lenses are the photographer’s primary creative tools. The way
a lens captures and presents an image to the camera’s sensor determines the visual outcome more than any other factor.
The ability to choose the right lens and use it well is one of the most important skills an aspiring photographer should acquire.
In this brief guide we’ll look at some of the basics that will help you to choose lenses that are suited to your needs, and
make the most out of them to create truly satisfying photographs.

Our eyes do it, cameras do it, even a simple
light-tight box with a tiny hole in one end will
do it: the feat of turning light into an image
can only be accomplished by first capturing
the light from a scene and projecting it onto
a surface. That surface, the “image plane,”
can be a wall, a piece of film, a sensor, or
the retina in our eye. In all cases the image
is projected upside-down and horizontally
reversed. Let’s take a look at the precursor of
modern cameras, the simplest camera of all:

To make this easier to understand, remember
that light normally travels in straight lines, then try
to imagine the subject being photographed as
being made up of a multitude of points of light of
appropriate brightness and color.

In the example in Figure 1, light from a point at
the top of the tree travels in a straight line

The real-world scene becomes an image
projected on the image plane, upside-down
and reversed left-to-right.

If a little hole can do all of this, why do we need lenses?

Pinholes can “project” images, but they are limited and inflexible. In
order for the projected image to be sufficiently sharp, the hole must be
very small, but this also means that the projected image is very dim.
In principle, lenses work similarly to the pinhole, but they are capable
of capturing more light from each point on the subject, and therefore
project a much brighter image. A lens can also bring more light into
sharp focus. That’s helpful because it means we can use short sub-

second exposures rather than having to make sure that both the
camera and subject stay perfectly still for many minutes or even hours,
which is usually the case with a pinhole camera. Other advantages are
that lenses can be made in a variety of focal lengths from wide-angle to
capture expansive scenes or telephoto to photograph distant subjects.
Modern lenses are precision optical devices that give photographers
boundless freedom to realize their creative vision by “drawing with light.”

Figure 1. A simple pinhole of appropriate size
is capable of projecting a sharp but dim image

Figure 2. A lens uses the principle of “refraction”
to gather more light from the subject and project
a sharp, bright image

The physical principle that allows lenses to
gather and focus light is called “refraction.”
Refraction causes lightwaves to change speed
and direction when they pass from one medium

(air, for example) to another (glass, for example),
and allows lenses to be designed to “bend” light
in a controlled way. The “refractive index” of an
optically transparent medium is a measure of
the speed of light in that medium, and therefore
the degree to which light will be “bent” by that
medium. Optical materials that have different
refractive indices—conventional optical glass and
ED glass, for example—are sometimes combined
in lenses to achieve the desired characteristics.

This is the most basic, most important
characteristic of any lens. Focal length plays
a primary role in determining what types of
subjects and compositions the lens is suitable
for (see page 10 for more details).

Lenses marked “SAM” or ”SSM” feature
built-in motors that drive the lens’s
focusing mechanism. Lenses that
don’t have internal motors are driven
by a motor in the camera body

This number represents the maximum
aperture, or “f-number,” of the lens
and tells you how “bright” the lens is

This switch lets you switch between
autofocus and manual focus modes.

How lens elements and groups move in a zoom lens

Light reflected by the subject is effectively collected
and focused by the lens elements to project an
image on the camera’s image sensor plane.

Pentaprism (flips the image so it can viewed in proper orientation)

All modern photographic lenses are “compound”
lenses that use a number of lens “elements”
precisely mounted along the same optical axis.
The use of multiple elements allows lens designers
to effectively reduce optical aberrations so you
get nice sharp, clean images.

“Elements” are the individual pieces of specially
shaped glass that make up the lens. A “group”
consists of two or three elements that have been
glued together to function as a unit. Sometimes
groups consist of different types of glass that
have been combined in order to control some
form of aberration. Lenses are sometimes
described in terms of the number of elements
and groups they contain. You’ll hear terms such
as “7-group 9-element lens.”

The distance scale indicates the
approximate distance from the
camera’s image plane to the object
that the camera is focused on.