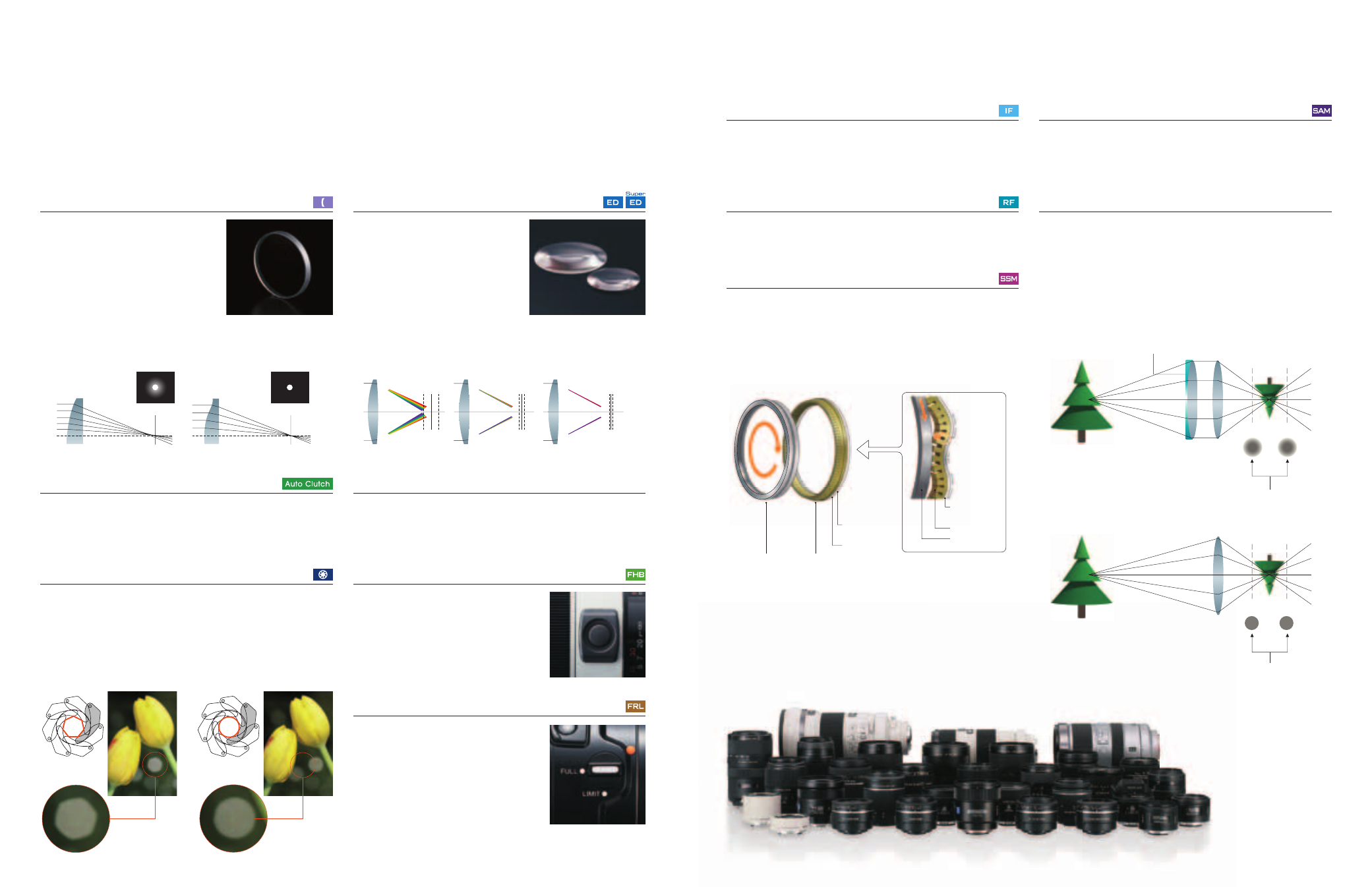 In this type of lens, focusing is achieved by moving only the internal elements.
The overall length of the lens remains constant, and the filter mounting
thread at the front of the lens remains stationary during focusing. The latter
characteristic is an advantage when using a polarizing filter. Other advantages
include fast autofocus response and reduced minimum focusing distances.

SAM is another type of internal lens motor for autofocus drive. While the SSM
motor described above is piezoelectric, the SAM motor is electromagnetic in
operation, but provides similar benefits: responsive autofocus operation that
does not require mechanical coupling from the camera body.

The auto clutch mechanism decouples the focus ring so that it does not
rotate during autofocus operation. This allows the lens to be cradled in one
hand without interfering with autofocus operation, for improved shooting
comfort and versatility.

Standard lens apertures appear as a flat-sided polygon when the lens is
stepped down, the number of sides corresponding to the number of blades
in the aperture. This results in the familiar polygonal out-of-focus highlights
seen in many photographs. Almost all a lenses feature a unique circular
aperture that contributes to smooth, natural defocusing.

This focusing feature is particularly important in certain lenses that are
designed for close focusing. It maintains optimum lens performance and
therefore maximum sharpness right down to the minimum focusing distance
by moving “floating” elements independently when focusing, rather than
moving the entire optical assembly as a whole.

Press this button to lock focus at the current
setting. The focus hold button is on the lens
barrel right under your fingertip for convenient,
fast operation.

This focusing configuration has similar advantages to internal focusing,
described above, but focusing is achieved by moving the rear lens elements
rather than the internal elements.

(around focus point “a”)

Defocusing of conventional
lens (around focus point “a”)

The technology required to produce first-class interchangeable camera lenses is very sophisticated indeed, and that
applies to every phase of the production process from design through precision parts manufacturing and assembly to
stringent quality assurance testing and more. Sony brings a distinguished history of excellence in all of these areas to
bear in producing the a lenses. You’ll feel the difference in the way a lenses handle, and you’ll see the difference in
the superior image quality they deliver.

Spherical aberration, slight misalignment at
the image plane between light that has passed
through the center and periphery of a simple
spherical lens, can become a noticeable
problem in large-aperture lenses. The most
effective solution is to use one or more specially
shaped aspherical elements near the aperture
stop to restore perfect alignment at the image
plane, thus maintaining high contrast even
with the aperture wide open. Aspherical lenses
arranged far from the aperture stop can minimize image distortion and flatness
of the image plane. Well-designed aspherical lens can reduce the number of
elements in the lens for less overall size and weight.

This feature can be used to limit focus range
when you need the quickest possible autofocus
response. On some lenses a single “limit” range will
match the characteristics of the lens (near focus
limit on macro lenses, for example), while some
lenses have a “near/far” limit range switch.

A unique a lens feature currently available only in the SAL135F28, STF

(Smooth Trans Focus) is an optical technology that is aimed specifically at
creating the smoothest, most visually pleasing defocusing effect possible
while retaining full resolution and contrast at in-focus areas. STF technology
employs a special “apodization” element that causes the intensity of
defocused point light sources to fade out radially so that no sharply defined
edges or geometry remain. The result is extraordinarily creamy defocusing
that goes beyond the capabilities of conventional lens technology.

SSM is an advanced direct-drive piezoelectric motor that is capable of
delivering high torque even at low speeds, with almost instantaneous start/
stop response. Its fast response and low-noise operation translate directly into
quick, quiet autofocus operation. SSM lenses also include position detection
for enhanced focusing precision. Other advantages of this advanced drive
system are that the focus ring does not rotate during autofocus operation, and
you can directly switch to manual focusing by simply rotating the focus ring.

SSM consists of a rotor (left), and a stator (right) on which plexoelectric
elements are mounted.