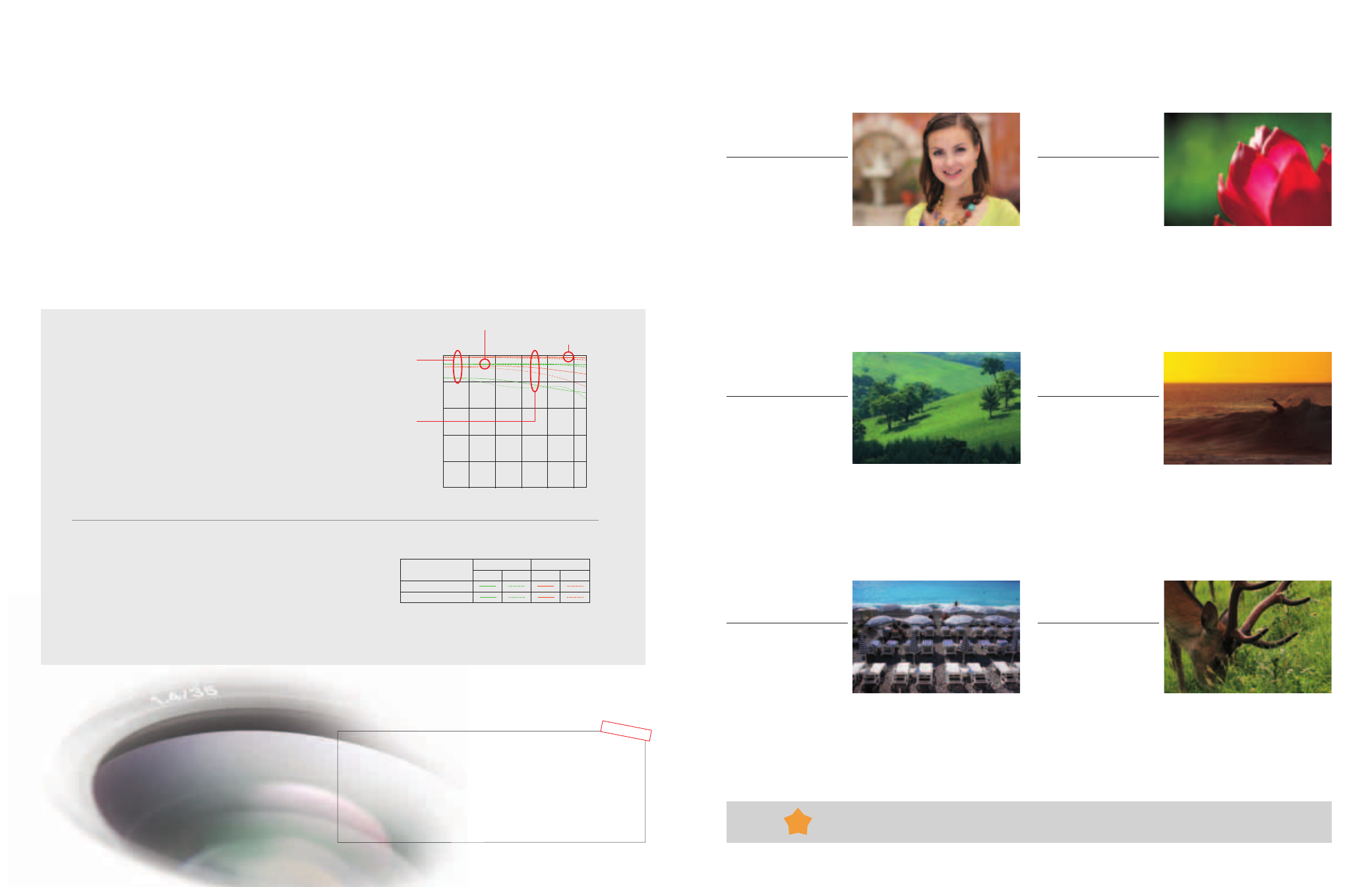 The term “snapshot” refers to
any photo opportunity that
arises spontaneously. You’re
shooting snapshots when you
take your camera for a walk
in the park, or on vacation, or
even when you’re in “serious”
street-shooting mode. The key is to capture the moment, and that requires
mobility and speed. Some photographers prefer to use a prime lens with a
focal length they’re comfortable with for this type of shooting: a “simple is
faster and better” approach. Others choose a compact mid-range zoom like
the 28-75mm F2.8 SAM (SAL2875) for maximum versatility. If you’re going to
be shooting snaps indoors or in evening or early morning light you’ll want to
choose a lens with a large maximum aperture.

Since you can rarely get close,
super-telephoto is the first focal
length choice for shooting
wildlife. Of course you won’t
need that much magnification
if you’re shooting pets at
home, but in the wild you’ll
want to be as far away as possible, to avoid scaring off your subject and for
safety. The 300mm F2.8 G telephoto prime (SAL300F28G) with the 1.4x or 2x
Teleconverter (SAL14TC or SAL20TC) is probably the most suitable choice.
Not only does that combination give you the reach you’ll need, but the quiet,
responsive operation of the SSM autofocus drive will be an advantage as
well. Hint: the above lens/teleconverter combination will give you even more
reach when used on an APS-C format body.

Although it is possible to have high resolution and low contrast, or vice versa, in the
context of MTF measurements these terms mean almost the same thing. Both good
resolution and contrast are necessary for a lens to be perceived as “sharp.” We’re
talking about “micro-contrast” here, which is the ability of a lens to differentiate
between tiny details that have similar tonal values. Micro-contrast is different from
global contrast, the overall range of tones in an image that people usually associate
with the term “contrast.” MTF measurements are useful because they show us the
relationship between a lens’s resolution and contrast in graphic form that makes it
easy to judge how the lens will perform in real-world applications.

For most portraits, the person
being photographed is the
most important element of
the photograph, so it can be
effective to de-emphasize
other non-essential elements.
The usual way of doing this is
to defocus the background so the viewer gets a sense of location without
being distracted from the main subject by too much surrounding detail.
Choose a lens that has a large maximum aperture and a focal length
between about 75mm and 150mm for flattering perspective, and so that
you don’t have to get uncomfortably close to your subject. The Planar T*
85mm F1.4 ZA (SAL8514Z), DT 50mm F1.8 SAM (SAL50F18), 85mm F2.8 SAM

(SEL50F18) are excellent choices for this type of photography.

(SEL30M35) for stationary subjects that you can get very close to, or the
100mm F2.8 Macro (SAL100M28) where a bit more working distance is
required. You can also shoot impressive close-ups such as flowers with any
lens that has a maximum magnification ratio of about 0.25x or more and a
sufficiently short minimum focusing distance. The 75-300mm F4.5-5.6 zoom

Since sports almost invariably
involve fast action, usually at
a distance, you’ll want to use
a telephoto lens that’s “fast”
enough to allow the use of
action-freezing shutter speeds.
The 300mm F2.8 G telephoto
prime (SAL300F28G) is an outstanding choice for this genre, but if you want
the framing versatility of a zoom the 70-200mm F2.8 G (SAL70200G) is a great
alternative. You could even use the SAL14TC 1.4x Teleconverter or SAL20TC 2x
Teleconverter with either of these lenses to provide more reach for distance
subjects or to grab close-ups of the action. Of course there are always
exceptions: if you can get close to the action you might be able to use a fast
wide-angle prime or zoom to capture a more dynamic perspective.

In the product pages that follow, this star icon identifies lenses: prime lenses that offer outstanding value in
compact, lightweight designs that are ideal for photographers at all levels. Each lens in the series is suited for a
particular type of photography, such as portraiture or macro, for example.

Although you can use
anything from wide angle to
telephoto lenses for landscape
photography, you’ll probably
get the most use out of wide
lenses that can capture the
grandeur and scale of nature
at its best. A wide-angle zoom such as the Vario-Sonnar T* 16-35mm F2.8 ZA
SSM (SAL1635Z) would be an excellent choice because it covers a range
of focal lengths that are extremely useful for landscape photography with
outstanding resolution and contrast. Stopped down to F8 or F11 lenses in
this focal length range will give you sufficient depth of field to keep the entire
scene in sharp focus. Hint: include prominent foreground objects to give your
landscape images a greater sense of scale.

Those MTF (Modulation Transfer Function) graphs that often accompany
lens specifications are really not as impenetrable as they look, and they can
give you a good idea of how a lens will perform, so it might be worth taking
a few minutes to learn what they mean.

MTF describes a lens’s ability to resolve finely spaced black and white lines
printed on a test target. As the lines get closer together they start to blur and
blend together as the limits of the lens’s resolving ability are reached. MTF
is plotted for multiple levels of subject detail (Y axis) at a number of points
from the optical center of the lens to its periphery (X axis). The more lines per
millimeter the lens can resolve, the better the resolution and contrast of the
lens.* This resolving power is expressed as line pairs per millimeter (lp/mm),
and sometimes as the more scientific sounding “spatial frequency.”

* For more info about these closely related terms, refer to the “Resolution, contrast

and sharpness” column below.

Take a look at the sample chart below to see how it all works to describe
lens performance. The solid green line shows radial contrast values for 10
lp/mm detail with the lens wide open. The line is almost flat, indicating
that resolution is constant at approximately 93% from the center to the
periphery of the lens. Very good. The solid red line shows contrast with the
same parameters except that the aperture has been stopped down to F8.
The red line is higher than the green line, indicating that stopping down has
improved resolution somewhat.

Basically, the higher and flatter the line, the better the performance for the
corresponding set of parameters. The smaller the distance between the
green and red lines, the more consistent the performance of the lens is over
a range of aperture settings. The smaller the gap between the solid and
dotted lines, the more attractive the defocusing is likely to be.

That’s really all you need to know to glean useful information from an MTF
chart. Just remember that comparing MTF graphs of different lenses is really
only meaningful if both lenses have similar focal lengths.

The X (horizontal) and Y (vertical) axes of the chart
correspond to the following values:

• X:  Distance from the optical center of the lens to

a point near its periphery, measured in millimeters.

• Y:  The degree of contrast measured at each point,

expressed as a percentage.

A number of parameters are represented by different line types on
the MTF chart, as defined by a legend that accompanies each
chart. Those parameters are:

All of the MTF charts that accompany the lens descriptions in the latter part of this brochure follow these conventions.

Indicates excellent performance
with high contrast and resolution
at the center of the lens.

Indicates the level to which
resolution and contrast are
maintained at the periphery
of the lens.