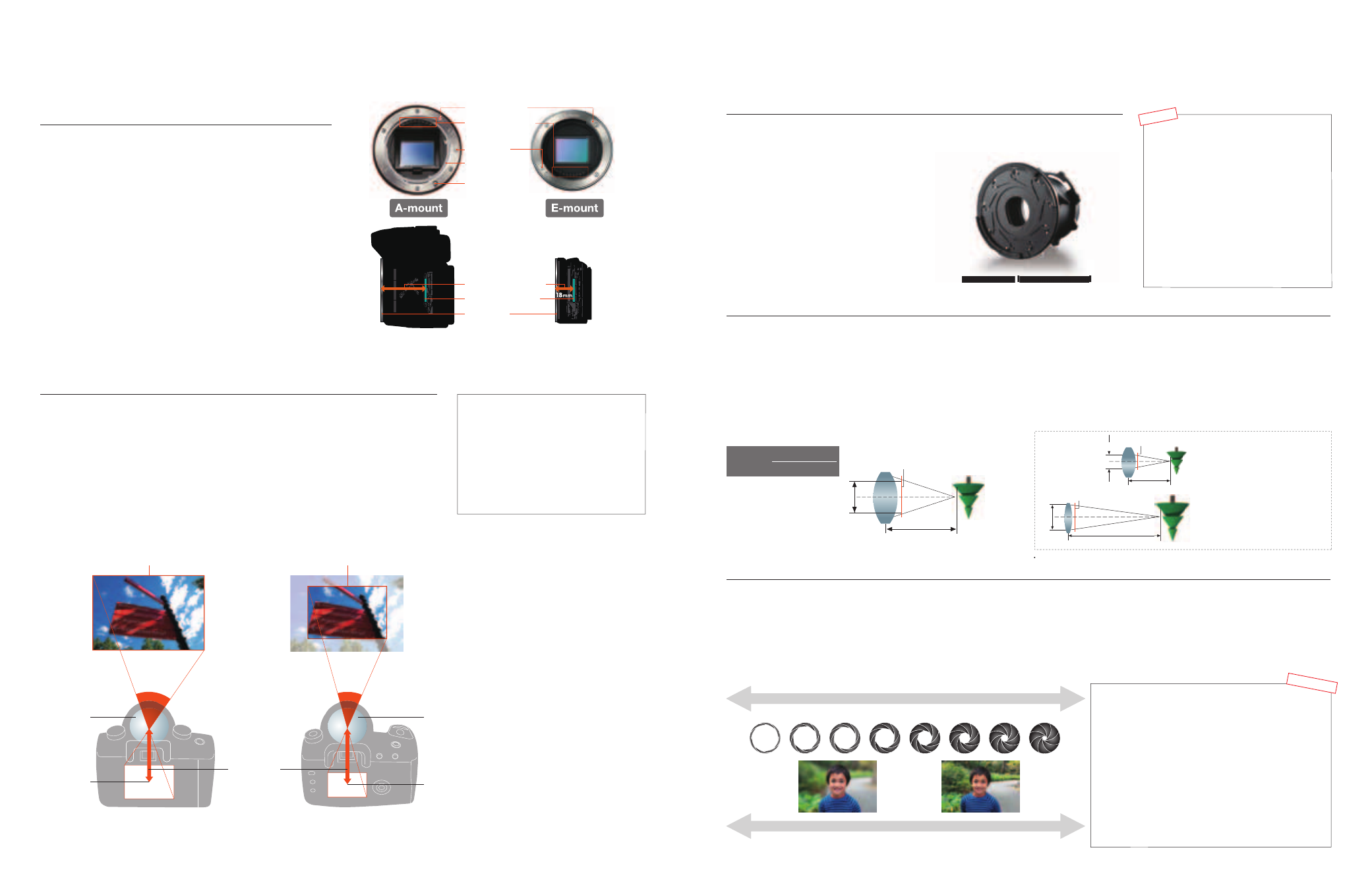 The aperture in a lens—also known as the
“diaphragm” or “iris”—is an ingenious piece
of mechanical engineering that provides a
variable-size opening in the optical path often
used to control the amount of light that passes
through the lens. Aperture and shutter speed are
the two primary means of controlling exposure. For
a given shutter speed, dimmer lighting will require
a larger aperture to allow more light to reach the
image sensor plane, while brighter light will require
a smaller aperture to achieve optimum exposure.
Alternatively, you could keep the same aperture
setting and change the shutter speed to achieve
similar results. The size of the opening provided by
the aperture also determines how “collimated” the
light passing through the lens is. Since this directly

affects depth of field, you’ll need to be in control of
both aperture and shutter speed to create images
that look the way you want them to.

Aperture, f-numbers and depth of field

Aperture and depth of field

“Depth of field” refers to the range between the nearest and farthest objects
in a scene that appear acceptably sharp. In extreme examples of narrow
depth of field, the in-focus depth might be just a few millimeters. At the
opposite extreme, some landscape photographs show very deep depth
of field with everything in sharp focus from just in front of the camera to
many kilometers away. Controlling depth of field is one of the most useful
techniques you have for creative photography.

Basically, larger apertures produce a narrower depth of field, so if you want to
shoot a portrait with a nicely defocused background you’ll want a wider aperture

(lower F-number). There are times when other factors come into play. Lenses of
longer focal lengths are generally capable of producing narrower depth of field.
This is partly because an F1.4 aperture in an 85mm lens, for example, is physically
larger than an F1.4 aperture in a wide-angle 24mm lens. Additionally, the
distance between objects in the scene being photographed will have an effect
on the perceived depth of field as well.

(size of the entrance pupil)

Aperture and focal length values in the illustration are approximate.

All lenses have a maximum and minimum
aperture, expressed as “f-numbers,” but it is the
maximum aperture that is most commonly quoted
in lens specifications. Take the Sony SAL35F14G,
for example. This is a 35mm F1.4 lens: 35mm is the
focal length and F1.4 is the maximum aperture.
But what exactly does “F1.4” mean? See the
“F-number math” box for some technical details,
but for a practical understanding it’s enough to

know that smaller f-numbers correspond to larger
apertures, and that F1.4 is about the largest
maximum aperture you’re likely to encounter on
general-purpose lenses. Lenses with a maximum
aperture of F1.4, F2, or F2.8 are generally
considered to be “fast” or “bright.”

The standard f-numbers you’ll use with camera
lenses are, from larger to smaller apertures:

The f-number is the focal length of the lens divided
by the effective diameter of the aperture. So in the
case of the SAL3514G lens, when the aperture is
set to its maximum of F1.4, the effective diameter of
the aperture will be 35 ÷ 1.4 = 25mm. Note that as
the focal length of the lens changes, the diameter
of the aperture at a given f-number will change
too. For example, an aperture of F1.4 in a 300mm
telephoto lens would require an effective aperture
diameter of 300 ÷ 1.4 ≈ 214mm! That would end up
being a huge, bulky and very expensive lens, which
is why you don’t see too many long telephoto
lenses with very large maximum apertures. There’s
really no need for the photographer to know what
the actual aperture diameter is, but it’s helpful to
understand the principle.

There’s actually more to shooting images with beautifully defocused
backgrounds than simply choosing a bright lens and opening
the aperture up all the way. That’s the first “key,” but sometimes
a large aperture alone won’t produce the desired results. The
second key is the distance between your subject and the
background. If the background is very close to your subject it
might fall within the depth of field, or be so close that the amount
of defocusing isn’t sufficient. Whenever possible, keep plenty of
distance between your subject and the background you want to
defocus. The third key is the focal length of the lens you use. As
mentioned above, it’s easier to get a narrow depth of field with
longer focal lengths, so take advantage of that characteristic as
well. Many photographers find that focal lengths between about
75mm and 100mm are ideal for shooting portraits with nicely
blurred backgrounds.

You may have heard the term “full-frame” in reference to cameras, but did you know it refers to the
frame size of 35mm film? The image area of a frame of 35mm film is approximately 36mm x 24mm

(“35mm” is the width of the strip of film), and that’s the size of the image sensor in a 35mm full-frame
format camera. Many interchangeable-lens digital cameras use slightly smaller “APS-C” format sensors
that measure approximately 24mm x 16mm or less. There are a number of other sensor formats,
including smaller sensors in digital point-and-shoot type cameras, but APS-C and 35mm full-frame
formats are the two most commonly used in interchangeable-lens cameras.

It is important to understand that there are two “formats” for A-mount interchangeable lenses as well.
Lenses with an image circle large enough to cover a 35mm full-frame sensor, and lenses with a smaller
image circle that is sufficient for APS-C format sensors. Sony lenses that have “DT” in the model name
are compatible with APS-C format SLR cameras only, while all other lenses will work with both APS-C and
35mm full-frame format cameras.

Sony a series interchangeable-lens digital cameras are currently produced
in two categories, each of which uses a different lens mount and different
types of lenses. A-mount SLR (single lens reflex) type cameras have a more
traditional shape and utilize moving mirrors or advanced translucent
mirrors. Ultra-compact E-mount cameras don’t use reflex mirrors at all.
Despite their remarkable compactness and portability, E-mount cameras
feature APS-C format sensors and are capable of delivering image quality
on a par with A-mount cameras.

*The angle of view values in this example correspond to those of a 50mm lens.

Lenses marked “DT” (Digital Technology) should
only be used on APS-C format cameras because
their image circle isn’t large enough to fully
cover a 35mm full frame sensor. If you do use a
DT lens on a full-frame camera, expect to see
a darkening of the image towards the edges of
the frame (vignetting). Although only E-mount
lenses can be directly mounted on E-mount
cameras, DT lenses can be mounted on these
cameras via an optional adaptor.