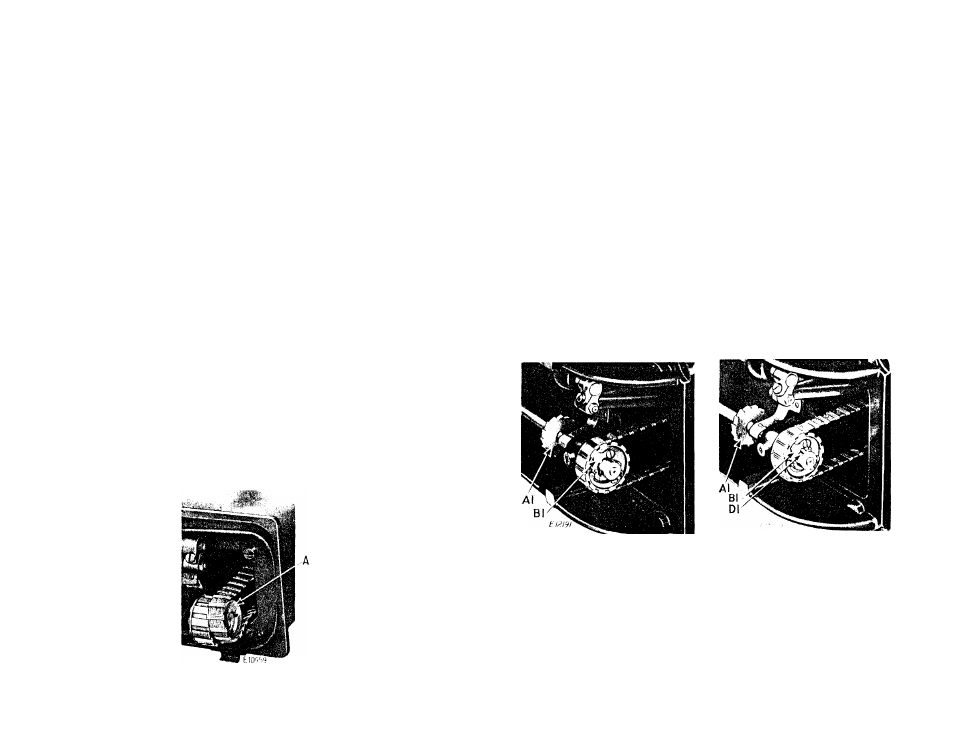 Remove the face plate and needle bar rock frame, then loosen the

clamp screw at (C,Fig.?) and draw out the rock shaft.

from within the Arm

Slide the connection belt off the lower belt pulley; remove the

balance wheel; loosen the three screws In the arm shaft bushing near

the balance wheel and remove the bushing; lift the belt up through the
arm cap hole as far as possible and draw It out through the space

normally occupied by the bushing.

the bed of the machine. This plate Is marked with an arrow at Its
lower end and directly aloTigslde of the plate Is the collar (K, Flg.5)

mounted on the hook shaft, which Is also marked with an arrow. After

wheel fron you until the thread take-up lever Is at Its highest point.
Then turn the hook shaft with the fingers until the two arrows, one on

the plate (J) and the other on the collar (K), are directly In line.

New, without disturbing either the arm shaft or the hook shaft, slip

the belt over the lower pulley. The feed will then be correctly timed

with the needle bar.

To facilitate the replacing of the belt on the lower pulley, use

the belt and slide It ov'er the hub of the pulley, as shewn In Fig. 22,

having the notches In the replacer engage the two set screws In the
hub of the pulley. Catch the belt clips In the groove at the lower
part of the pulley and turn the balance wheel toward you until the
belt Is fully over the pulley, assisting the belt clips from under the

pulley rhn with a screwdriver when necessary. Then remove the replacer.

NOTE: As belt replacer 265058 will serve for several machines

It Is not regularly furnished with the machine, and must be ordered

To Re-engage the Safety Clutch

spllned to prevent the hooks from getting out of time. The safety
clutch located In the lower belt pulley prevents damage In the event

Draw back the bed slides, turn the balance wheel back and forth

slightly, and remove the material that may be Jamming the hooks. If

necessary to re-engage the clutch, press down the lock stud (B, Fig, 2)

(Al,Flg. 23) which will prevent the hook driving shaft from turning

backward. Turn the balance wheel away fron you until the locking lever

(Bl) snaps Into the notch (Dl) In the shaft collar as shewn In Fig.